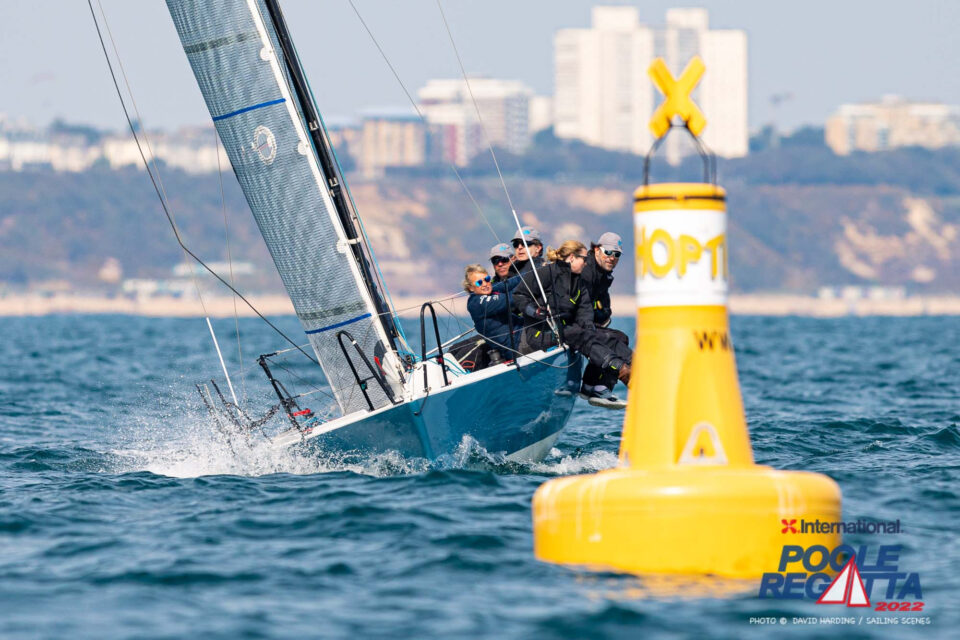 For the first time, the Royal Ocean Racing Club’s GBR IRC National Championship in 2024 will not take place from the club’s base in Cowes but will form part of the International Paint Poole Regatta. The 26th edition of the IRC Nationals, one of the major annual regattas for the international rating system operated by the RORC will take place on Poole Bay over 25-27th May 2024.

One of the oldest sailing events in the world, the Poole and Bournemouth Regatta, as it was originally known, was first held 1849. At this time yachting was a popular pastime of royalty and the aristocracy with clubs being set up and regattas held around the UK’s entire coastline.

Originally the Poole and Bournemouth Regatta was raced for The Canford Cup, a George IV silver vase made in 1822. The trophy was first awarded in 1849 to Gleam, of P Roberts, Esq of the Southern Yacht Club in Southampton. It subsequently disappeared for decades, until it was recovered in 2015. Recently it has been won by Sam Laidlaw’s Quarter Tonner Aguila in 2016, Richard Powell’s Marvel in 2018 and this year by Ed Wilton’s Who’s Next.

The UK IRC National Championship was first held in 1999 with the advent of the RORC/UNCL’s new IR2000 rule. Developed from the Channel Handicap System (CHS), the maths behind the IRC rule is undisclosed to avoid the arms race that inevitably occurs when competitive, well-resourced teams attempt to optimise their yachts to published rules. Between CHS and IRC, the rule has been refined over the course of almost 40 years and between them the RORC/UNCL rating offices hold a huge database spanning small keelboats to the world’s largest superyachts, from cruisers to grand prix racers. Significantly all certificates issued in the UK, both Standard and Endorsed, are verified by the professional staff at the RORC Rating Office.

As adding complexity to rating systems typically leads to little or no change in results, the IRC has been deliberately kept simple with ratings calculated from declared boat data for standard certificates (i.e. no need for measurement) while for an IRC Endorsed certificate a yacht’s data must be verified by measurement but without the requirement for complex stability and hull measurements. A yacht’s IRC rating is expressed as a single number (TCC) for time-on-time rating and can be used at events internationally. In practice this makes it relatively simple for teams to calculate their position on the course and their result within seconds of finishing.

Andrew Pearce, International Paint Poole Regatta President commented: “We are delighted that the Royal Ocean Racing Club (RORC) have announced that they are inviting the International Paint Poole Regatta to host the IRC Nationals as part of their regatta in 2024. Moving it out of the Solent to Poole is something we have been talking about for some time as the two regattas fit very comfortably together. With three days and eight races the two regattas are a perfect fit and Poole being a very short trip out of the Solent should encourage all potential boats that are interested in racing in the event.”

Jeremy Wilton, RORC CEO was present at the announcement on the first day of the Southampton International Boat Show and commented: “It is a real pleasure for RORC to be part of the International Paint Poole Regatta. It may not seem like a big decision to move the IRC Nationals away from its traditional home of Cowes, but it is a big decision within the Club and within IRC to actually move the event. It’s never been done before and as it has the title ‘Nationals’ we felt it was really important to take it to a different part of the UK.

Jason Smithwick, Director of Rating RORC Rating Office commented: “We are excited to have the event as part of the International Paint Poole Regatta. For some time we have had the idea of moving the IRC Nationals to other locations to vary the venue and allow other boats to participate in their local waters and now is the perfect time. We hope Poole will attract the regular Solent racers and in particular the boats from the South West and beyond. Poole is a perfect first edition of this initiative with great race organisation and sailing waters. RORC will of course be part of the core team in helping the International Paint Poole Regatta deliver a world class Nationals event that IRC sailors deserve.”